Registration of charities in Jersey

Registration of Charities in Jersey as of 1 January 2019: Are you match fit?

From 1 January 2019, a charity active in Jersey will have to be registered with the Charity Commissioner in order legally to call itself a charity, and to enjoy tax relief in Jersey by virtue of its charitable status.

What sort of organisation do you want to submit for registration?

As part of the registration process charities will have to confirm what kind of entity they are. For many this has meant that now is a good time to consider what sort of body they are and whether their structure best suits the needs of their organisation and its supporters.

Setting aside special incorporations by Royal Charter or by Act of the States, there are four sorts of organisation most commonly used to carry out charitable activities in Jersey. They are not all the same, as the following chart explains by looking at five different aspects of how they each operate.

Until now the most popular arrangements have been the charitable trust and the incorporated association however a glance at the chart will show that the guarantee company also ticks all the boxes. 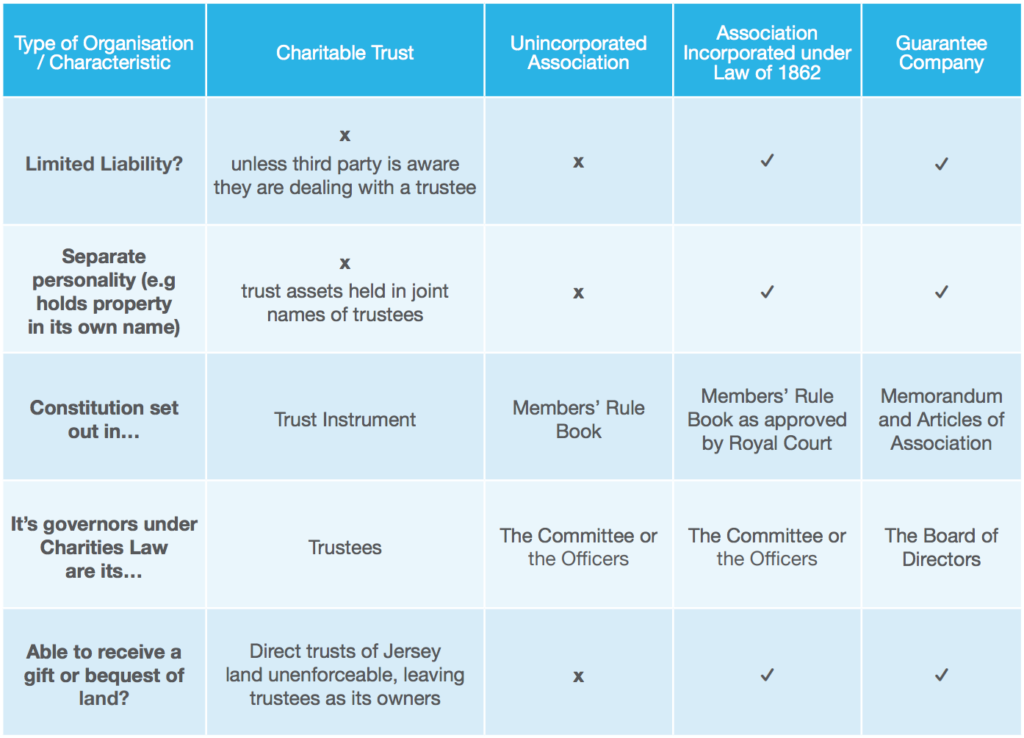 Why the guarantee company is attracting attention

Until the arrival of the new Charities Law with its requirements to file documentation and its emphasis on the duties of a charity’s managers – known as its governors - guarantee companies were thought of as burdened by rather high levels of regulatory compliance. Now that the regulatory duties required of a guarantee company (e.g. filing annual accounts and an annual return and operating more formal systems of management) are in any event to be required of all charitable bodies under the Charities Law this burden no longer seems such a high price to pay for the advantages such companies offer.

Chief among these are:

Guarantee companies are run, like all companies, by their board of directors. Unlike all companies they have members rather than shareholders. They do not issue shares because it is not expected that there will be any profit for sharing out among the members – that’s all intended to go to the good cause.

Instead the members sign a guarantee for a nominal sum, say £5.00, and that sets the limit on their liability for the debts of their company. Collectively the members can say the company belongs to them and thus that its directors are answerable to them.

The rules governing the operation of a guarantee company will be set out in its Memorandum and Articles of Association, respectively stating what it exists to do and how it is to do it. Thus;

The registration process under the Charities Law The broad picture

When registering as a charity in Jersey:

The good news is that registered charities will benefit from Income Tax and GST relief by virtue of their charitable status.

On the other hand moving forwards, there will be heightened regulation and supervision, for example new statutory duties of probity and competence for the governors to meet. This duty will exist not only as, but instead of duties already imposed as a matter of statute or customary law on trustees and company directors. Charity governors will have collective responsibility, making them all equally responsible for their charity and the duties they must fulfil.

The Charity’s constitution should set a minimum or maximum number of governors required, and the minimum number required for a quorum. Typically, it is good practice to have at least three. If a Charity governor fails to comply with his or her duties, this may be considered as misconduct, and the Charity Commissioner is able to take steps against them, such action to be proportionate in all the circumstances.

Therefore, where a governor has acted reasonably and honestly, this is unlikely to be considered as misconduct. However the need to be able to demonstrate reasonable and honest conduct underlines the need to keep proper records of any decision-making processes. Company law tells us this needs to cover both the decision made and the reasons why it was felt to be better than any alternative(s).

Charity governors should take the following steps to ensure they are fulfilling their general duties:

A blast of regulatory fresh air will soon be blowing through Jersey’s extensive third sector. With any luck it will be as invigorating as the real thing.

Thank you for contacting us. We'll be in touch as soon as possible.

We're sorry but it looks like something has gone wrong. Please try again.